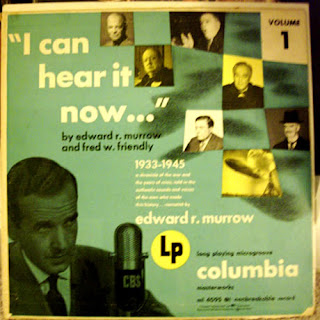 Over the course of his career, Murrow was never content just to sit back and report the news. He was aware that the news is also history. In the late 1940s, he recorded a series of records called I Can Hear It Now. The records were produced by Fred Friendly from a Rhode Island radio station.

The records combined speeches and historical events with narration provided by Murrow. The series was so popular that CBS took notice, and since Murrow worked for CBS, they were able to strike a deal and bring the premise to radio. It was a little different for the time. They brought the stories to life by using recorded sounds like guns when presenting a story about war or aircraft when talking about aviation.

I Can Hear It Now was presented in a magazine format which means that the show is divided into segments, and each story is presented in a dedicated segment. (You might be familiar with the format from television shows like 60 Minutes.)

The I Can Hear It Now records covered events from 1933 to 1945 in several volumes. Murrow takes a point in history and with the narration, he weaves the story using snippets from speeches, other recordings, and sound effects to build the story. The way he crafted the story brought it to life.